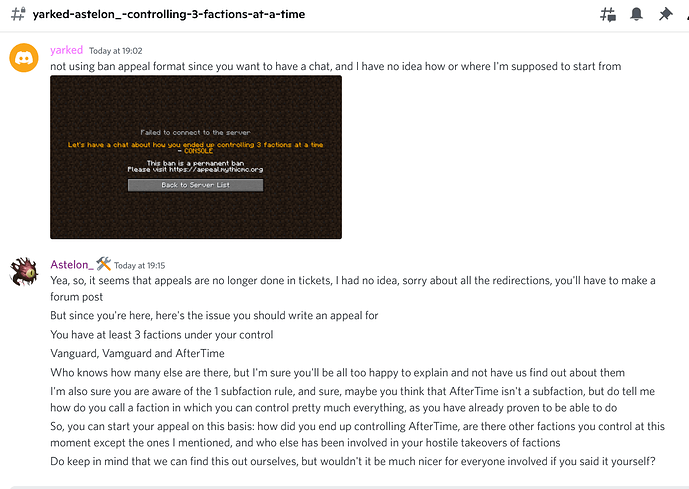 image1181×838 181 KB
so to answer your question, we’ll have to go back to around 1 year ago. I remember it was, before the leader of BeforeTime timed out, I joined the faction as it was open. After I had the leadership, I gave myself the perm of AfterTime and that’s the story of how I received the perm of AfterTime. During that time, I had thought of disbanding AfterTime but then my mind changed as I believe that’s just a loophole to steal items, and so I asked in one of my old tickets regarding this issue. Not sure if mine still exists in the old ticket category, maybe you can give it a check. I’ve gotten my answer from there and decided to just wait until the leader of AfterTime timed out himself. I don’t think I have the perm of other factions at the moment except the ones you mentioned. Not sure if this counts, I did let Hunyo16 to enter and invite K4nt_hui13 to AfterTime, other than that I don’t think there’s anyone else.
Pls do correct me if I said something wrong as this is a long ago incident, and I don’t wish to give any impression of attempting to lie.
Astelon May 4, 2022, 3:01pm #2

because I let pride and greed go to my head. Actually, I didn’t ask immediately when I took hold of the perm of AfterTime because I struggled, whether disbanding it is fine, and so I waited for a good time to ask which is weeks later or more. Come to think of it, I realize I should’ve asked immediately instead of after the deed or waiting for a good time which is my fault.

Take over as in like what I did to AfterTime right?(i.e. granting myself the perm for control while the leader is still not timed out yet). I can’t recall of giving myself perm of other factions in this condition, disbanded or not, other than AfterTime. Sorry for the wait as I’ve tried recalling as much as possible and hope that I answered correctly. Again, correct me if I’m wrong.

I am pretty sure this is allowed as I’m not the only one who used this strategy and staffs are aware as well, but no harm asking I guess. Is joining a soon to be disbanded open faction allowed? For more information: A loophole in faction plugin

Take over the way you did in AfterTime, yes, but also by joining, yourself or your friends, before the leader times out in order to gain leadership.

I am aware of the loophole and that it’s not against the rules, though in taking over the faction, you basically gain another subfaction.

I did let Hunyo16 to enter and invite K4nt_hui13 to AfterTime, other than that I don’t think there’s anyone else.

ok quoting this in case you missed it, I hope I didn’t miss out anything either, pls correct me if I’m wrong.

Okay thanks for the confirmation, didn’t know about the last part, but there are no intention of making them as a sub-faction and is cleared out asap so hope there’s no problem about it.

Let me ask again, then. What other factions did you take over, either by giving yourself permissions, either by joining them before the leader timed out, either by any other means? And who are the players involved in these takeovers? All of them, not just the takeover of AfterTime.

You gained control of the faction. That’s pretty much what a subfaction is, another faction that the main one controls. Even though you don’t use it as others do, you still make use of it to loot it before other players get to. One could even argue that this is another rule broken. In gaining control of them and not marking them as a subfaction, you basically have illegal subfactions by their nature, ignoring that you’d have more than one.

And stop with the “correct me if I’m wrong”. You said it once, it’s enough.

Taken over illegally: AfterTime
Players involved are myself, Hunyo16 and K4nt_hui13

Players involved are myself, Hunyo16, K4nt_hui13 and Und3rline
That’s all I can remember

Ok, back to AfterTime and BeforeTime. I discovered today that BeforeTime was blown up after it was looted. Mind sharing why that happened, and who decided it?

I asked Hunyo16 to do it in an attempt to discover any possible buried chests because those are mostly plot areas if I remembered correctly. Anything wrong with it or did the tnt somehow damaged AfterTime?

You’re entirely certain that was the case? I’ve been to other factions you took over, and haven’t noticed that much tnt damage, if at all. I’ll actually go check now

It really depends on what faction we are looting, we normally dig straight down for checking purposes, rarely use tnt even if I didn’t take over the faction(disbanded on its own) and sometimes not even bothered checking it. Also found the proof after a long search

but then again, anything wrong with it? We are not allowed to use TNT anymore?

Well, I’ve visited quite a bunch of factions you’ve looted in the past. No sign of tnt. I must say, I’m a bit disappointed, though not surprised. See, your friend over there, he told me a different story. Which means one of you is lying. If you’re lying, that’s one more thing to your ban. But if he’s lying, well, we can’t just let that go past in a serious case like this and will have to take action. That plus his involvement in this whole issue. I was already considering banning the rest of your accomplices. So, which one is it, yarked? Who’s the liar and who’s telling the truth?

yea we rarely use tnt, maybe check the world border corners underground for sign of tnt(not sure tho)? As I said,

Pls do correct me if I said something wrong as this is a long ago incident, and I don’t wish to give any impression of attempting to lie.

I honestly forgot the existence of GlobalArmy until I clicked into that post A loophole in faction plugin
Is the proof (Astelon_ - controlling 3 factions at a time - yarked - #11 by yarked) above not clear enough? The reason of “chunk check” is

an attempt to discover any possible buried chests

While “tnt check the plots” is just a shorter sentence for “chunk check and you may use tnt to check the plots”. Mind telling the story he told? Since when the usage of TNT has become illegal?

I see, I think I understand the situation now, and believe that it’s just a misunderstanding? but yeah my motive is just to look for hidden chests

Screenshot_2022-05-05-05-19-52-31_12e7337cc65813dde0e4b7e1092016d5417×599 40.4 KB
Well you see, he spent quite a lot of time retrieving the concrete and was a bit tired by the time he finished. In order to give him the motivation or morale-boost, I permitted him to use tnt for chunk checking since I rarely let anyone or myself to use tnt. As you can see from the picture, he was tired and was reluctant to chunk check in the beginning. Maybe the story he provided is what truly made him to do so. Actually, how did you ask him the question? Is it
“Why did you TNT BeforeTime?” or
“Why did you guys TNT BeforeTime?” or another way
Small difference yet a huge difference for the result/answer, do you see where I’m going with this?
Astelon May 4, 2022, 11:31pm #16

Not buying your story. Not much to support it, honestly. I’ll consider if to ban him tomorrow. I probably will. I don’t appreciate being lied to, and if he didn’t lie, but you also didn’t lie, I’m honestly not sure the server needs people like him. Of course, coupled with the shady and illegal stuff he’s been involved with.

If I’m being honest, using tnt to check the plots in BeforeTime is kinda stupid, given that there’s literally nothing underneath them. But if you say that you weren’t lying; or well, weren’t lying about wanting to check them with tnt. Either way, use this night to really consider about who was honest and who was not.

Yes it is as you said and from

, I allowed him to use TNT to check the plots, to look for hidden chests, nothing else.

I disagree on how you’re going to ban me because of “lying”
Well of course you can, you’re a dev
I just want to say, I did not lie, with the fact that it’s the truth: “to make sure it won’t get used anymore”

Yarked had permitted me to bombard BeforeTime as he has told in this post. Meaning that, I could TNT BeforeTime whenever I want to, so by then, it was all up to me to decide whether should I blow up that faction or not.
Telling you that I blew up BeforeTime as “to make sure it won’t get used anymore” and it is the truth because it was my action decided freely by myself.
“PERMITTED” by him not “ORDERED”.

I’m honestly not sure the server needs people like him

→ like dropouts? like me? like how you know that I’m having a high chance of being forced to drop out of school in the next 2 weeks?
ye, they probably don’t

Maybe the story he provided is what truly made him to do so.

To avoid misunderstandings, I simply only gave him the permission to use TNT to check the plots for hidden chest, nothing else.

No need to put up any quarrel here @Hunyo16 , this is a ban appeal, did you get permission from anyone to post here?

No need to put up any quarrel here @Hunyo16 , this is a ban appeal, did you get permission from anyone to post here?