In-game name: Munazzam
What happened: i suspect a player to have 2 account
Who you suspect and why: i suspect _Shadowsong because There is one player named ZenithGarcia who just started playing recently

First of all, this player named _shadowsong he quit survival and mythic saying that “nobody likes me here so i’ll just quit playing here”

Having a dragon head and totems right now is very sus, given that many end cities are looted now.
There is a good chance that _shadowsong put his loot in a particular location and then logged in as zenithgarcia and took it from there , and never logged in back as _shadowsong. He might have used vpn though im not sure to log in so to change his location but not sure just guessing.

For a player that is so new he aleady knew all the " server Commands and the survival spots very well". He had no problem in finding anything and seemed to know the server well. {SCREENSHOT ATTACHED}

He also talked about lag often which was the same thing which _shadowsong said .

Now location wise, both seemed to be of the same religion and location. Both love to read and write books.

_Shadowsong always kept on lieing most of the times to players. He usually never told the truth.

They both seem to also have a similar log in and off timing. shadow would usually go off at 7pm ist and so did zenith and later on come online at 12 am - 3am , according to ist.

Please do investigation on this. theres a good chance he might be shadowsong and he created a new account cause almost everyone used to insult him and mock him so he left and created tht account zenithgarcia. So with this account people wouldn’t think he is the same player, _Shadowsong might hv CHANGED HIS LOCATION whatever he keeps on travelling between kashmir and some middle east country. 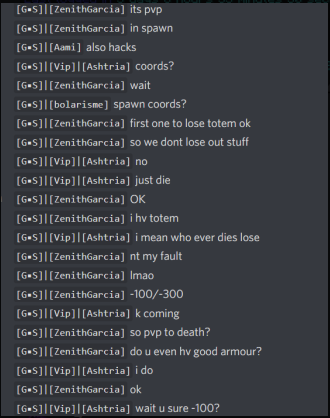 He requested a name change through a ticket, thanks for reporting though in case it was not known to us.