Valuable items got lost in /ah

Ingame name: Ashtria
Discord Id: Lon#2647
Reason for reporting: So I usually sell Netherite Ingots and I always put it on /ah so that if the player wants to buy they can just seek one on /ah. There’s this time I put 4 netherite ingots on /ah and waited for it to get sold, at that time also I was busy on personal things so I didn’t get online for like 9 days, and when the time that I am about to check it which is right now I am making this appeal, my balance didn’t even grow and I checked the expired items on /ah there’s nothing. I wonder where did it go or why it is gone. I do hope to get it refunded which is 4 netherite ingots. Thank you so much for understanding. 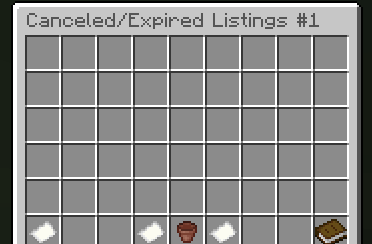 As I remember after a few days items u are selling will go to the expired menu then if u don’t collect them in time they will disappear and i don’t think we can get them back.

If that so, they better announce it so that players that don’t have any idea about it will know how /ah works.

Losing much money for this kind of bug or I don’t know what do you call of this is pretty much disgrace, imagine grinding hard for the item but ended up losing it just because you don’t know how /ah works.

Still expecting for staff response about this.

I don’t remember the exact amount of days before it expires but it does. That’s likely what happened here and if you failed to claim your items before expiration, that’s your fault and the items will be not be refunded. As for adding announcement to players, I don’t know how much can be done about this, and there’s to much to do as it is anyways so it wouldn’t be a priority since this likely won’t affect many people compared to other things.

Are you for real? There’s no chance for it getting refunded?

The “fault” is offensive. Anyway it’s disappointing though, doing salient things in life is now a fault. Well you guys should work for this, /ah should not be like this, because it’s not always the players fault for not withdrawing the items they trying to sell or why they can’t get on as soon as possible. At least announce this thing on discord so that the players will get alarmed when doing it.

Lost half a mil 'cause of this:(

After a little bit of research i found out that ur item will be on ah for 2 days before going to the Expired menu which will stay for another 10 days until it disappear. It’s not totally ur fault but u have been playing in Mythic for pretty long so this problem can be easily avoided especially with valuable items. My advise is just sell the item in trade channel on discord and wait for dms, putting valuable items on ah when u don’t have much time to play everyday is risky.
Sorry for ur loss and have a nice day.

Well I guess I can’t do anything about it. I will just accept the fact that the item won’t be refunded.

My advise is just sell the item in trade channel on discord and wait for dms, putting valuable items on ah when u don’t have much time to play everyday is risky.

I don’t really do this kind of trading because not all players are in the discord server, in fact if you put items on /ah there’s a possibility that someone will buy it. But thanks for the advise though, I might do this starting now.