I want to start off with a conversation that we had the other day on global.

[G▪F]|[▲Dragy]|[marcosan] i have a feling wehen i look away for a second i will get baned
[G▪M]|[Admin]|[Pixel_Love] as long as you’re not breaking the rules, there should be no need to worry

I wouldn’t call this a hint so much as I would like to call this a wake up call. I don’t know if you did anything at that point in time, but I thought my words of wisdom would have hit you by now. Clearly they did not.

Another thing that I would like to add is that your inability to read directions. The ban message on your screen tells you where to go and appeal. It does not tell you to come into my DMs. I typically don’t mind DMs as much as other people, but the reason why I bring this up is because not only did you decide to take your appeal into my DMs do, but you continued to bother me with questions about your appeal.

I could not fathom why you decide to appeal when you still cannot read the rules regarding on how to make a damn appeal. It’s not a wise decision just to read the format, paste it in its entirety, and not read the rest of the text which includes additional rules and guidelines. I’ve read your original post, and it made you look like a fool.

The point of ban appeals is to learn from your mistakes, that being said this is your 3rd ban. Now as for why your banned, you trapped a warp with lava and you took just over 4 stacks of iron from chest(s) without permission. That makes this your 2nd ban that involves stealing, previously you got banned for stealing from a lotto by renaming a paper. You did not use the format correctly for your 3rd ban appeal… The title should have been 32294/Pixel_love – Death trap and Stealing from faction – marcosan However I’ll give you the benefit of the doubt being your previous appeals were likely in discord tickets.

This being your 3rd ban, it won’t be easy as you’ve already been banned 2 other times, and its your 2nd ban for stealing. If I include past times you have broken a total of 7 different rules and broke the stealing rule twice, this proves you haven’t read the rules well even after being banned more then once or just lack the ability to learn to follow them properly. Before I even consider giving one final chance, you need to tell me why your chose to trap the warp and take the iron. You will also need to identify what rules you broke this time from https://rules.mythicmc.org/ and write them here, and while your there you can read the read the rest of the rules again to.

and im readin the rules to find the one i broke

i did not take iron idk what happend to the iron

you sure this is the story you wanna stick with? lying to staff is very bad you know?

idfc if its disabanned or not you don’t trap a warp, theres people who warp to every public warp on occasion. also this is complete bs… the warp faces a window which our f home is in clear view of… like tell me how tf you couldn’t tell it was our faction land ._.

the chunks dint load in 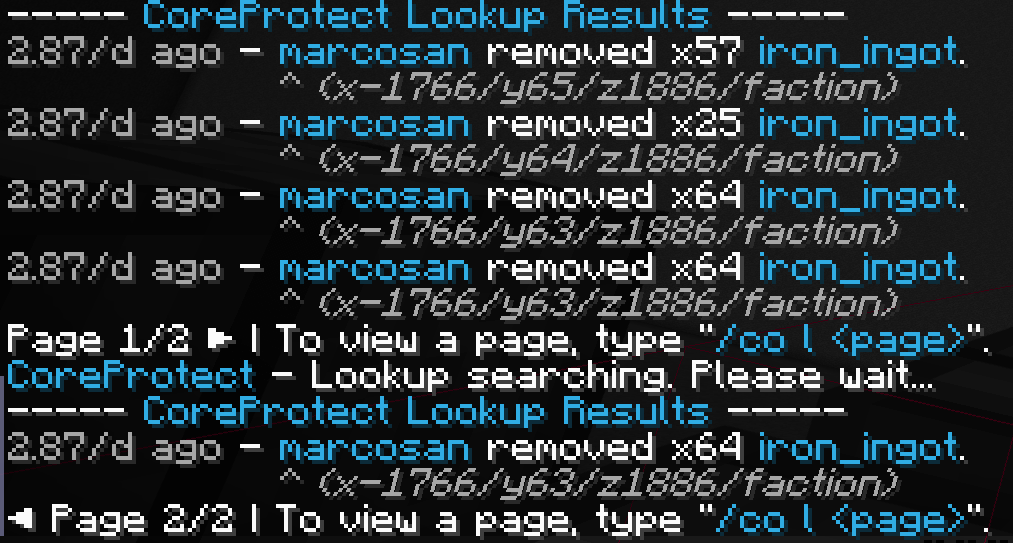 pixel already took the iron back from a shulker in your inventory.

since you’ve decided to stick with your story your now lying to staff, theres also a note on your first appeal that you likely lied to. You had like a 5% chance of being unbanned before this but now its 0%. If I can’t trust you not to lie to me, then I can’t trust you to stop your habit of taking things from ppls chests without asking, which i caught you doing once before on another occasion but you put it back.

Have a nice life in banville, i heard its nice there :3